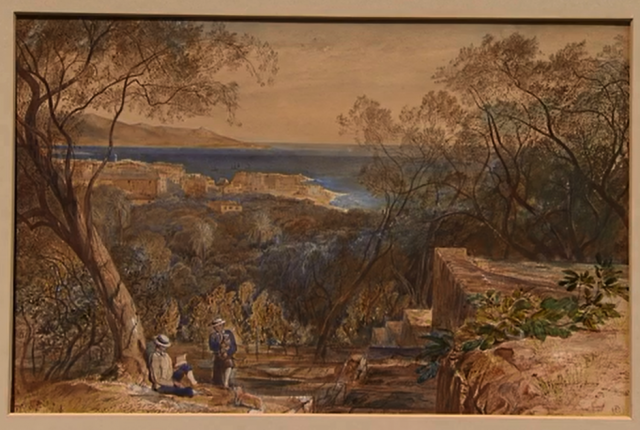 A recent Antiques Roadshow (BBC1, November 23) included a fine Lear watercolour of the view over San Remo from the steps of Villa Congreve. It was brought in by the great-grandson of Walter Congreve, who in 1870 sold Lear an adjacent plot on which to build the first house he ever owned, the Villa Emily, named ostensibly after an (unseen) niece in New Zealand, but in fact out of his love for Emily Tennyson, wife of the Poet Laureate who he had worshipped for the past twenty years – ‘the perfect woman, my own first choice (for a wife)’, he confided to his diary. He often raged at Alfred’s unfeeling treatment of her, and at one point came close to urging her to leave him – a step, however, which as a devout Christian she would not consider.

Congreve and his wife are shown in the foreground, which dates it to 1870 because Mrs. C died in November of that year (unusually, Lear himself didn’t date it).  He had taught at Rugby under the future Archbishop Tait (who once, on hearing Lear singing his own setting to music of Alfred’s poem Home, they brought her warrior dead, told him that ‘You ought to have half the Laureateship!’) before being appointed Second Master at the newly-founded Marlborough; however, his time there was cut short by the illness of his wife, whereupon they had moved to the sunnier Mediterranean in the hope of a cure – in vain, as it turned out, for she had lasted only a few months more. He had then acquired a second wife who bore him two sons, Hubert (1858) and Arnold (1862) before she in turn succumbed.

She is depicted holding a ginger cat, which can be assumed to be the ‘Misson’ mentioned by Lear in his 1878 diary as having ‘for 8 years exclusively attached itself to Arny, always waiting outside his bedroom door till he opened it when rising, & then sitting on his bed till bkft. time when she always sat on his chair or shoulder’. With his natural affinity for small children, it was not long before he was giving the two boys lessons in drawing, for which Hubert must have shown some aptitude because he later recalled that they had ‘led [Lear] to setting his heart on my taking up art as a profession’. Congreve had employed an English nanny, one Ellen Walters, to help with their upbringing, and it had also taken Lear little time to divine that there was something more to the relationship because only a month after their mother’s death he noted that ‘I fancy I can see who may be a 3rd Mrs. C’; it duly emerged that it had already been developing for some time.

Lear’s concern for the boys’ welfare drew him more and more into the invidious position of in loco parentis, and he took it upon himself to suggest that Hubert should be sent away to school because ‘I saw him becoming too forward’. The proposal was rejected, but matters were eventually brought to head when Ellen became pregnant, much to the scandalisation of the rest of the expatriate community. Although she retired to England to have her child (a son), the prospect of her return brought further consternation: Walter talked wildly of selling up and taking off with her to Tasmania, while Hubert, by now 17, showed to Lear that ‘his misery was extreme, and the poor lad sobbed as if his heart would break,’ saying ‘How can a fellow bear the sight of a woman who has caused the ruin of a whole family?’

As if this was not burden enough, Lear faced a further crisis in the sudden deterioration in the health of his faithful Suliot servant Giorgio, who begged to be escorted back to Corfu to die in his home there. Lear’s own health, never robust at the best of times, was now itself turning distinctly frail, and he asked Congreve if Hubert might be allowed to accompany them – a request which was readily granted. Arriving at Brindisi in a snowstorm, instead of boarding the ferry they were forced to take refuge in a cheap hotel where ‘we got into beds with a single thin blanket each in a room with the fine snow drifting in through badly-fitted windows.’ In pursuit of her bizarre nostrum that Lear was homosexual, Susan Chitty suggested that he was now ‘in love with young Hubert’, although she conceded that even in these circumstances ‘he never shared his bed.’ Another biographer, Peter Levi, found ‘no evidence whatever’ for such a thesis, and indeed it all pointed the other way: Lear was 25 when he wrote to his sister Ann that ‘I wish to goodness I could get a wife’, and 50 years later – and only months before his death – he was still on the point of proposing to his love of the last twenty years, Gussie Bethell, and was only dissuaded by a reluctance to burden her with his epilepsy and many other ailments.

By now it was clear to both of them that Hubert was not cut out to be an artist and Lear helped to arrange for him to enrol for a degree in Architecture at King’s College, London; at the annual prizegiving, he was hugely gratified to see him called up to collect no less than eleven awards. Congreve meanwhile was finally persuaded to ‘make an honest woman’ of Ellen, and moved with her and Arny down to the coast to Alassio. Just before they left Lear asked what was to become of Misson, to be told by a tearful Arny that over his protests his father had ordered the gardener to drown the cat. It was to be the final straw for the two men’s relationship.