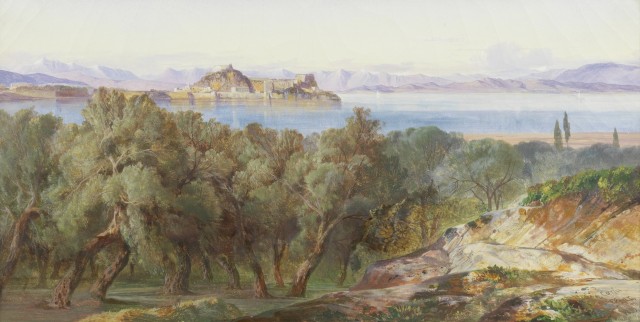 A wonderful oil of Corfu by Edward Lear will be sold at Bonhams in London on 2nd March 2016. See below for more information or click on the following link: https://www.bonhams.com/auctions/23166/preview_lot/4894306/

Lear first visited Corfu in 1848, arriving by boat from Naples, and was immediately entranced by it, revealing in a letter to his sister ‘it really is a Paradise’. Lear later wrote that ‘The whole island is in undulations from the plain where the city is, to the higher hills on the west side; & all the space is covered with one immense grove of olive trees-so that you see over a carpet of wood wherever you look; & the higher you go, the more you see, & always the Citadel & the Lake, & then the Straights, with the great Albanian mountains beyond.’

Lear returned to Corfu in December 1855, settling there until 1863, when many British residents left the island with the transfer of sovereignty to Greece. He returned again in 1877.