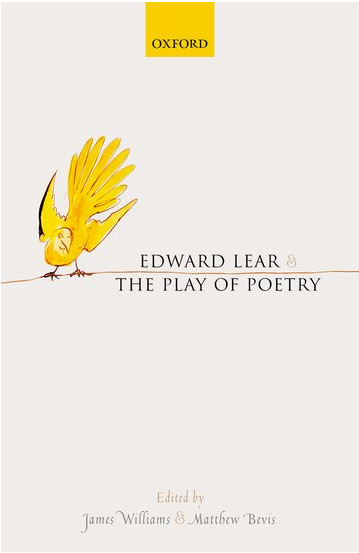 At £65 this book is not pitched at the average member, but as a work of scholarship it deserves a review for the Society’s files. In their Introduction, the joint editors, James Williams (organiser of the very successful 2012 Oxford Conference) and Matthew Bevis attempt to open up the ‘play’ in the Nonsenses to all sorts of interpretations which stray a long way from Lear’s own stated purpose ‘to make little folks merry’. While the melancholy of some of the longer, later poems (especially The Courtship of the Yonghy-Bonghy-Bo) draw on his own experiences, the same can hardly be said for the early limericks which were knocked out for the amusement of the Stanley grandchildren before he left Knowsley at the age of 25.

In his own essay, Williams writes pertinently on Lear’s vision of himself as a court jester, particularly in the multiple play that he made of his name’s coincidence with Shakespeare’s King and of Italian comic tradition (itself drawn from Aristophanes) of self-identification with birds. Sarah Lodge shines an interesting light Lear’s virulent, but hitherto little studied anti-clericalism (although he continued to patronise his local Anglican church up to the end of his life). He was born into a family of zealous Dissenters, but he came to reject the fundamentalist views of his eldest sister and surrogate mother Ann, eventually agreeing on a truce never to discuss religion and later becoming a firm follower of Darwin’s revelations. Unlike most children’s literature of the times, the poems are signally free of moralising and delight in perversity simply for their amusement – as some of the contributors to this book are apt to forget in their pursuit of abstruse verbal conceits. What is the average reader supposed to make, for example, of Michael O’Neill’s discussion of ‘Romantic delight in particularity as well as suggestiveness – a suggestiveness inseparable from particularity’?

Peter Robinson commendably prefaces his entertaining ‘EL: Celebrity Chef’ by disclaiming any attempt ‘to make a meal of such questions’ – Lear in fact took a serious interest in subject, serious enough for the diaries to list the contents of almost every meal (complete with seating plans at dinners) – but in straining to find significance in the place names coupled with food in the limericks, he too comes close to sophistry; can the choice of Putney have been inspired by anything other than its happening to rhyme with chutney? In spite of sounding a warning that ‘when trying to respond to Lear’s poetry critical commentary can sound even more bathetic than usual’, Matthew Bevis makes similarly heavy weather of his frequent use of falls in the limericks for comic effect – ‘pratfalls’, as we now call them – although he is on firmer ground on drawing links between their deployment in the longer poems and the curse of his epilepsy which caused him, in Lear’s own words, ‘to tumble here & there’. Again, Anna Henchman’s essay on his predilection for fanciful exaggeration of body parts or their dismemberment and reallocation to different species is quickly subsumed by prolonged discussion of the influence of Darwinian evolutionism and the contemporary enthusiasm for comparative anatomy.

Hugh Haughton observes that Lear’s letters, which performed such an important part in his life (he once claimed to have written twenty before breakfast) ‘regularly oscillate between depression and comedy’; they not only enabled him, as a solitary exile, to keep in touch with his legions of friends and admirers, but also served as a safety valve against the attacks of the ‘Morbids’ linked to his epilepsy by inspiring the creation of his own nonsense vocabulary – extending even to parodies of the verses of Tennyson (possibly in revenge for his mistreatment of Emily, his own great love). Other essays discuss his influence on twentieth century poets as diverse as Gertrude Stein, James Joyce, T.S. Eliot, W.H. Auden, John Ashbery and Stevie Smith, while two more explore the subject of his love life more closely. For Daniel Karlin The Owl and the Pussy-cat is ‘among the greatest of love lyrics… [fit to rank alongside] Christina Rosetti’, against which he sets the later and unhappy sequel (where Pussy falls to her death and Owl is left to eke out a lonely widowerhood) written many years later when he concluded that his long and hesitant courtship of Gussie Bethell had finally run its course. Peter Swaab by contrast pursues the bizarre notion that he was homosexual, ignoring all the evidence of the diaries where hardly a week passes in which he does not actively contemplate marriage to a succession of prospective partners (once Emily had made it clear that her Christian principles forbade her leaving Alfred for him) and where he lamented in his final years: ‘What women I have missed as life companions!’ Vivien Noakes first hinted at it in The Life of a Wanderer’, but then retracted it in later editions and in his 1995 biography Peter Levi finally put it conclusively to rest. It is high time that academia did likewise.

If you wish to purchase the book, click on the following link: