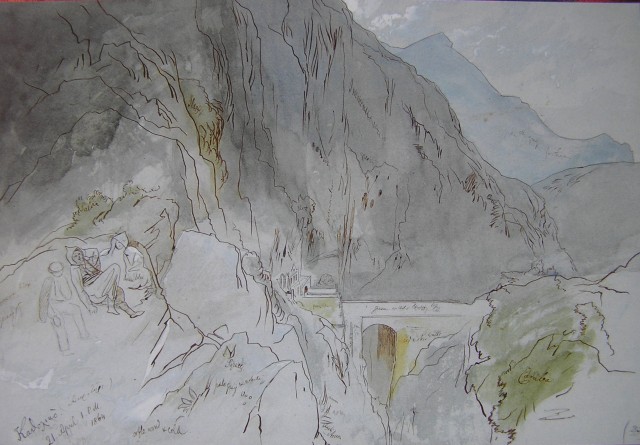 What do we know about the collectors of Edward Lear’s landscape drawings?   As I worked a few years ago on the provenance of the 185 numbered drawings Lear made on his only visit to Crete in 1864 (see  www.edwardlearandcrete.weebly.com) I was struck by the fragmented state of our knowledge, but also how occasionally an individual stood out as Lear enthusiast and connoisseur.

Most of Lear’s drawings appeared on the London market in 1929 when two events occurred, probably coincidentally.  First, Mildred Lushington, one of the daughters of Sir Franklin Lushington, Lear’s friend and executor, sold the family holdings of Lear’s works, including his remaining diaries.  There was a private sale of many drawings to the print dealer Craddock & Barnard, and further sales at two auctions.  Second, Thomas Baring, the Earl of Northbrook’s very large Lear collection was auctioned later that year at Sotheby’s.  The sale included most of Lear’s drawings from his travels in India and Ceylon in 1873/74.  .

The outcomes of these sales, and in particular the enthusiastic acquisitions by two Americans, William B. Osgood Field and Philip Hofer, are well described in Philip Hofer’s Edward Lear as a Landscape Draughtsman (Oxford University Press 1967) and more recently by Hope Mayo in her paper The Edward Lear Collection at Harvard University, published in the Harvard Library Bulletin, Summer-Fall 2011, Volume 22: Number 2-3.

Hope Mayo’s authoritative paper – she is the Philip Hofer Curator of Printing and Graphic Arts at the Houghton Library at Harvard – gives a comprehensive description of Field’s and Hofer’s acquisitions and of how the Houghton Library subsequently acquired by gift from these two Americans the outstanding collection of Lear’s works which it holds today (and which has recently been digitized).   Houghton has the world’s largest collection of Lear’s landscape drawings – some 3,600 in all.

Lear numbered his drawings on many of his travels, and so it is possible to calculate for much of his career how many drawings he made directly from his subject, some of which later became the basis for worked up watercolours or oil paintings.  I am engaged on a project to make a realistic estimate of his total output, but it seems very unlikely that there were less than 10,000.

Whilst the Houghton Library holds perhaps a third of these, other art institutions have far fewer in total.   Outstanding is the Yale Centre for British Art which holds some 490 drawings, most the gift of another American collector, Donald Gallup, and with a focus on the Egyptian travels.

In Britain the Liverpool Libraries hold the largest collection, certainly in public hands, with over 300 drawings, with a specific focus on his travels in Italy.  The Gennadius Library in Athens has the fourth largest collection with 198 drawings, all of Greek scenes and most acquired in 1929 directly from Craddock & Barnard at the instigation of Joannes Gennadius, the donor of the Library.

After these no British or American collections reach 100.  The British Museum, Tate Britain, the National Maritime Museum, the UK Government Art Collection, the Ashmolean Museum in Oxford and the National Galleries of Scotland all have over 25 oils, watercolours and drawings each.  In the United States, the National Gallery of Art in Washington DC and the Museum of Art, Rhode Island School of Design, Providence also hold over 25 each. But all the above total little more than 1,200 drawings.

As part of the celebrations of the 200th anniversary of Lear’s birth in 2012, all UK galleries believed to hold Lears were asked to consider putting their holdings on display and several did.  The listing made then is being updated and should appear on the Edward Lear Society website later in 2015.

So what of the majority of Lear landscape drawings which are not publicly available?  Some will undoubtedly have been destroyed, both during his lifetime and over more than a century since his death.  Hofer records (p.64) that Lear’s descendants, the Gillies family in New Zealand, were sent about 300 watercolour drawings and sketches by the Lushingtons but in 1937 a fire destroyed most of these whilst they were in storage.

Between 1958 and 2014 over 2,200 individual works on paper (which may include some nonsense pictures and lithographs, not the subject of this article) were sold in the major auction houses.  This has been a steady turnover from 250 in the 1970s to a peak of over 600 in the 1980s, and then in the 400s in the 1990s and 2000s decades.  Most of these will have passed from and into private hands, although dealers will hold a few.

There were also plenty of sales between 1929 and the 1950s at a time when Craddock & Barnard’s stock was being sold, and a number of exhibitions of Lear’s work were held in London.   As well as the Americans, UK collectors were buying drawings at low prices in Charing Cross Road from the print dealers there.

One such was Professor R.M. Dawkins, Bywater and Sotheby Professor of Byzantine and Modern Greek Language and Literature at Oxford University, who built up a fine collection of Lear’s Cretan drawings from 1864.  He first visited Crete in 1903[S.R.1]  and did some excavations at Palaiokastro in the east of the island.   He was Director of the British School of Archaeology in Athens from 1906 to 1914 and was an expert on dialect folk tales in Asia Minor.  In 1915/16 he was sent to Crete as a lieutenant in the Royal Naval Voluntary Reserve where he spent the rest of the War travelling all over the island, gathering not only intelligence about the political leanings of the local people but also a wealth of linguistic and ethnographic material.[1]

After his death in 1955 his collection was sold by Sotheby’s on 30 November 1955 as ‘A collection of Mediterranean views by Edward Lear’. Dawkins had acquired what must have been the largest group of Cretan drawings after those of the Gennadius Library.  At the Sotheby’s auction 42 drawings or sheets of drawings were sold and 22 are certainly or probably identified as numbered drawings of Crete. Single drawing lots at the Sotheby’s sale sold for between £30 and £80 each.

This is the story of just one dedicated collector of Lear’s landscapes.  It would be interesting to hear of more.