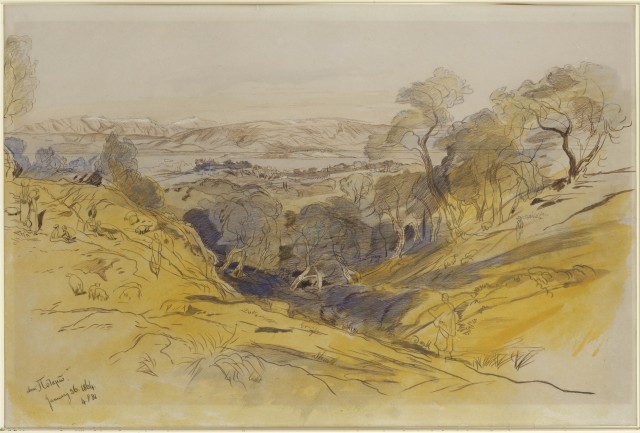 My project’s objective to answer this question was to make an estimate of the number of original dated landscape drawings (as opposed to worked up watercolours) which Lear undertook in a career of over fifty years.

No reliable estimate has previously been made of Lear’s work output as a topographical artist. Hope Mayo of the Houghton Library, Harvard, acknowledges this in her paper The Edward Lear Collection at Harvard University, published in the Harvard Library Bulletin, Summer-Fall 2011, Volume 22: Number 2-3 (p.95).

The majority of Lear’s drawings appeared on the London market in 1929, over forty years after his death. Some then went into public collections, and others were bought by individuals often from London dealers or through auctions. Those in public collections are known to amount to around 5,000 (and the collections are detailed in a separate paper published by the Edward Lear Society). But there is considerable uncertainty about the numbers in private hands, particularly as Lear also gave a good many of the drawings to friends before his death.

The pdf below gives the detailed research which leads to my conclusion that Lear probably made between 8,500 and 9,400 dated landscape drawings over his near 50 years of travels.

Edward Lear’s Drawings – how many were there