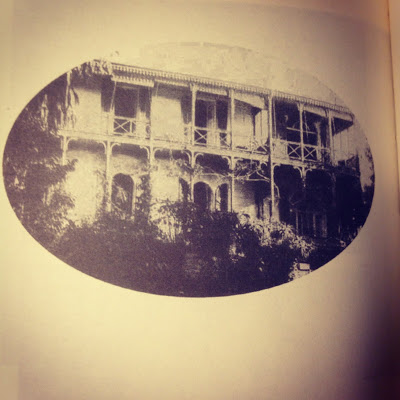 Edward Lear named Villa Emily after his friend and wife of poet Alfred Tennyson. Works began in 1871 but soon after it was built a big hotel was erected in front of the Villa, obstructing the wonderful views. Lear was so upset that he put the Villa up for sale and had an identical one built on the sea and called it Villa Tennyson. It is said that the reason for building it in the exact same way as Villa Emily was to make his beloved cat, Foss, at ease. Villa Emily became a guest house under the name Villa Verde alla Foce. It should still exist at no. 6 in Via Hope but there are no traces of it in any hotel lists in Sanremo. In the 1930s it was managed for several years by Dora Kellner, Walter Benjamin’s former wife. It was here that Benjamin took refuge from the Nazis and occasionally stayed at the Villa between 1934 and 1938. It is said that some of Benjamin’s important documents and letters went missing from here and were never found.

Villa Tennyson was demolished shortly after Lear’s death and a hotel was built in its place. The last I heard of Foss’s headstone was a few months ago from Valerie Wadsworth, according to whom “Foss’s headstone is now probably part of the foundations for the Giò Ponti swimming pool at Hotel Royal” Alas!

Edward Lear’s grave is in the Cimitero monumentale della Foce in Sanremo, next to Giorgio’s, and his son Nicola’s. The cemetery, which also has the tombs of some 80 British citizens, is in very bad condition and in need of restoration. As there is no money in Italy for anything at the moment, the Sanremo authorities are thinking of disinterring some of the “guests” and sell their places to new “tenants” — I suppose Lear’s grave won’t be touched as they are thinking of making the graveyard a tourist attraction!