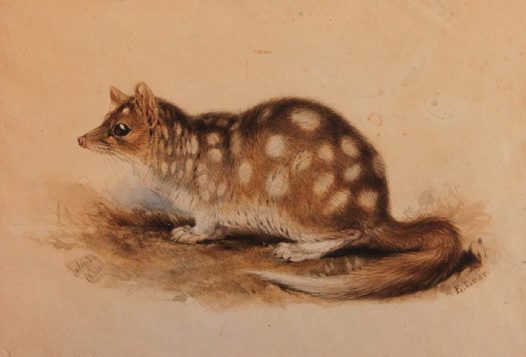 Poet and illustrator Edward Lear painted many Australian birds and mammals without ever setting foot in the country. He is fondly remembered as an ingenious nonsense poet, an engaging travel writer and a painter of luminous landscapes in Europe, Asia and the Middle East. Often overshadowed by the enormity of these achievements is his remarkable success as a scientific illustrator. Lear’s early immersion in the world of science did much to shape the rest of his extraordinary life. Although he never visited Australia, Lear seemed to have a special interest in the continent’s birds and animals and singled them out for special attention during his decade-long focus on natural history.

The twentieth of 21 children, Edward Lear was born to a prosperous middle-class family in 1812 in the village of Holloway, just north of London, but was raised by his oldest sister, Ann, after his family suffered financial ruin when Lear was just four. With Ann’s encouragement, he began his artistic career at a very young age by drawing what he described as ‘uncommon queer shopsketches, … coloring prints, screens, fans … [and] making morbid disease drawings for hospitals and certain doctors of physic’. The work was hardly inspiring, but it generated a modest income and encouraged Lear to believe he might one day gain financial independence through his brush, pen and pencil.

As a teenager, in the late 1820s, he shifted his artistic focus from the lifeless subjects of the factory and hospital ward to the far more appealing, and demonstrably vital, occupants of London’s Zoological Gardens. There he was particularly attracted to the exotic birds and animals sent from Australia and many other British colonies.

At the newly built aviary in Regents Park, and at the Zoological Society’s administrative headquarters on Bruton Street, he made a series of life studies that would earn him commissions to illustrate books of natural history by many of England’s leading naturalists. Most importantly, his first-hand observations enabled him to publish his own groundbreaking monograph on parrots, Illustrations of the Family of Psittacidae, or Parrots from 1830 to 1832.

Lear quickly developed a flair for capturing the distinctive personalities of his avian subjects, including Australian cockatoos, cockatiels, parrots and parakeets. His natural history paintings combined scientific accuracy with an artistic verve rarely seen in the science tomes of the period and established Lear as one of the most talented wildlife artists of his day. His Parrots monograph set a new standard for artistic excellence in scientific publishing. Remarkably, its creator was just 19 years old at the time he presented his book to the world.

Parrots drew enthusiastic praise from critics but was not a commercial success. Within a few years of its publication, Lear was happy to sell his inventory of unsold plates to John Gould (1804–81), then chief taxidermist at the Zoological Society. Gould had recently begun his parallel career as an ornithological publisher. He recognised Lear’s enormous talent for illustration and soon employed him to create plates for his own series of large-format bird books.

Among other admirers of Lear’s work was Lord Edward Stanley (1775–1851), who was president of the Zoological Society when Lear first sought permission to sketch in its aviary. Stanley (after 1834, the 13th Earl of Derby) had a collection of exotic birds and animals, many from Australia, which he kept in a large private menagerie at Knowsley Hall, his family’s estate near Liverpool. Stanley extended an invitation to Lear to make paintings of his animals, which Lear accepted enthusiastically.

Beginning in 1830 and for the next seven years, Lear divided his time between London, where he continued to create illustrations for John Gould and others, and Liverpool, where he made more than 100 life portraits of the birds, mammals and reptiles in Lord Stanley’s remarkable menagerie. It was during his extended visits to Knowsley Hall that Lear began to create the endearing limericks and other nonsense verse for which he is so well known today. Self-illustrated in a loose, seemingly childlike style, these flights of whimsy may have provided Lear with just the relief he needed from the pressures of his demanding scientific commissions.

Despite his enormous talent for natural history illustration, and the secure livelihood it could have provided him, Lear found the close, exacting nature of that work both physically challenging and, over time, emotionally unfulfilling. His few surviving letters from this period reveal that he longed to devote more time to travel and to exploring the pleasures of landscape painting.

A generous offer by Lord Stanley and his cousin Robert Hornby to send Lear to Rome in 1838 gave the young artist the chance he had been hoping for and brought to a close his short but distinguished career as a natural history illustrator. Claiming poor eyesight, Lear never returned to the professional field in which he had established his first international reputation only six years before. Fortunately, he left behind an extraordinary collection of paintings, many of which documented the wildlife of Australia.

A selection of these are reproduced here, some for the first time. They are offered in commemoration of the 200th anniversary of Edward Lear’s birth.

Robert McCracken Peck is Curator of Art and Artifacts and Senior Fellow at the Academy of Natural Sciences of Drexel University in Philadelphia. Earlier this year he curated an exhibition of Edward Lear’s natural history paintings at Harvard University’s Houghton Library.

Download this story, with illustrations, as a pdf here.

Courtesy of our friends at: http://australianmuseum.net.au/Edward-Lear-200/#sthash.HW7VV6Uq.dpuf