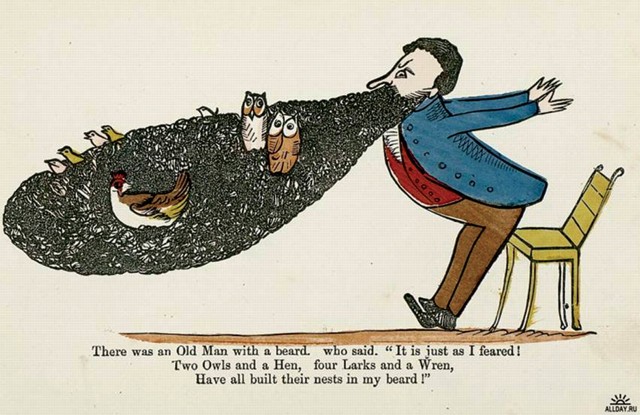 Edward Lear has been called the Laurete of Nonsense which is a very accurate description of this great man, who penned more nonsensical verse and rhymes than any other in this field.  He has only one peer equal and that is Lewis Carroll, but where the creator of Alice in Wonderful had some half dozen nonsensical masterpieces to his credit, Lear has a whole zoo full of eccentric characters, many of which have become part of the popular imagination.

Those who knew something of Edward Lear associate him principally with limericks, and he certainly wrote a large number, but this is not the only nonsense he created.  He did some delightful drawings illustrating a nonsense alphabet, nonsense botany and geography and natural history, but it is for his nonsense verse that he is best remembered.  This is where his creative genius flowed most magnificently.  Drawing on his subconscious he created a whole cosmology, where real animals exist side by side with fictitious characters and creatures of his own imagination, and as if to prove it was his own escapist world, we often find one of these creatures popping up in another poem devoted to an entirely different character.

When you consider Lear’s childhood and the personal and physical problems with which he had to cope, it is amazing that he developed into the gentle, sensitive and loving human being he became.  Born in Highgate, which was then a village outside the city of London in 1812, two hundred years ago, he was the last but one of a very large family of 21 children, most of whom he outlived, and as often happened in those days a number died in childbirth or infancy.  His father, Jeremiah Lear, was what was termed a fruiterer with a business in the City of London to which he would commute by carriage every day.  The Lear’s appeared to live in some comfort until his father was persuaded to invest most of his money in an exciting new organisation called the London Stock Exchange.  In the economically unsettled times which followed the Napoleonic wars he became a defaulter on the Stock Exchange and though initially his debts were settled by friends and he was able to continue in business, he fell further into debt and he eventually finished up as a bankrupt in the King’s Bench Prison, where he languished for four years.  In those days there was no such thing as a Welfare State to support the family, so everything had to be sold, the house, the furniture and the carriages. The older children were put out to work where it could be found, and the younger ones went with Mrs Lear to a small house in New Street where she could be close to her husband in prison, whom she would visit frequently taking with her, according to one report, a full evening meal.

It was a harsh world in which to live in the middle of the nineteenth century, and one report stated that within four months, four of the older daughters died of sudden hardship.  To ease the burden on Mrs Lear, young Edward was given to his oldest sister, Ann, to be brought up and cared for.  He was only four years of age and from that time his mother had nothing more to do with him.

Young Edward was a very sensitive child, often ill and subject to bouts of giddiness and depression, which in his diaries later he described as “the morbids”, a phrase Winston Churchill took to describe unhappy periods in his childhood.  Edward was also short-sighted, which must have been very inhibiting at a time when spectacles had not been developed as we know them today.  He naturally could not understand why his mother had rejected him, and his father had gone away, and also why they had suddenly to sell their handsome home in Highgate, and he had to move into a modest little place with his sister in central London.  He was a very sad and lonely little boy.  As if this was not enough, he was also an epileptic.  He had his first attacks when he was about five years of age.  His parental rejection could have been a contributory factor, but it was probably inherited, as his sister, Jane, was also an epileptic.  Some of Edward’s seizures were quite severe, which must have been terrifying to a young child.  Apparently he would have warnings when attacks were about to take place, so he was always able to get away from people.  In fact until the day he died no one, except close family and a few friends, ever knew he was an epileptic.  Epilepsy is a lonely illness at the best of times, but in the middle of the nineteenth century it was still shrouded in ignorance and obscured with old wives tales.  Some of the reasons given for an attack were quite horrendous.  Some thought it was akin to madness or the result of excessive personal physical abuse.  As if this was not enough Edward also suffered from asthma and bronchitis.  In fact it was from bronchitis he eventually died in 1888 at the age of 76.  So often ill and lonely he was thrown back on his own resources and as children when they find everything around them too much to handle will escape into their own created fantasy world.   I believe young Edward escaped more frequently than most, and his fantasy world was a very colourful one and his imagination very vivid, so this could have been the source which fired his imagination and later produced the wonderful nonsense that flowed from his pen.  In fact he described his nonsense verse as “fantastical rhymes without reason”.

All of Lear’s poems convey a different mood and are probably indicative of his emotional state at the time of writing.  On the surface they are full of fun, and children for whom they were basically written can identify with the fantastical nonsense they convey, but adults also respond to the charm and wit and on occasions a deeper emotion which Lear was unconsciously conveying.  One clear example of this was his poem about The Yonghy-Bonghy-Bo, who suffered from unrequited love and ran away across the seas to “the sunset isles of Boshem”.  I am sure Lear suffered from unrequited love.  He never married.  He used to fantasise about marriage and he would have crushes on people, even crushes on men but he was not searching for physical love but for someone who would want him as a person in the way that his parents had not wanted him as a child.   Through his natural charm and sensibility he was often sought after as a friend, and he loved to be with children who responded to him with a naturalness that he found endearing.  What he was searching for and never found was real spiritual involvement with another person.  Twice he became close to someone of the opposite sex and it looked as if it might lead to marriage, but at the last minute he ran away.  He obviously could not face that final commitment.  Perhaps he was nervous of physical contact, or maybe on a physiological level the close relationship he had with his sister, Ann, whom he treated as his mother, inhibited him from making a comfortable relationship with the opposite sex, or maybe as I think, it was the epilepsy.  There was such a stigma attached to this illness at the time that maybe he thought if after marriage this problem was discovered by his wife it would destroy any romance or closeness, so he ran away rather than face the possible embarrassment.

So Edward Lear makes the pilgrimage of life alone, but not without friends, many friends, and acquaintances, and the devotion of his loyal servant Giorgio Kokali.  He was driven by an inner urge for perfection, an innate loneliness, and a stubborn resolve to handle all the physical disadvantages he had inherited.  In doing so achieved so much as an artist, poet and humorous writer and the legacy of his creative work has long outlasted that of many of his contemporaries, and is still enjoyed today by a vast number of admirers of all ages.